February 16-21, 2020: Melissa gives an invited poster presentation entitled "State-Level Action on Ocean Acidification: States Care More than You Think" at the Ocean Sciences Meeting in San Diego, CA. This was the product of her recent internship with the Ocean Conservancy funded by the NSF's Chemical Oceanography Program.

January 7-9, 2020: Melissa attends NOAA OA Community Meeting and Mini-Symposium in Miami, FL and presents a talk "Buffer capacity of estuaries in the northwesten Gulf of Mexico".

December 16, 2019: Melissa wrote an article reflecting her internship experience with the Ocean Conservancy. This internship has been funded by the NSF's Chemical Oceanography Program.

November 18, 2019: Hongming's manuscript entitled "Hydrologic controls on CO2 chemistry and flux in subtropical lagoonal estuaries of the northwestern Gulf of Mexico" is accepted for publication in the journal Limnology and Oceanography.

November 7, 2019: The project "Ocean Acidification on a Crossroad - Enhanced Respiration, Upwelling, Increasing Atmospheric CO2, and their interactions in the northwestern Gulf of Mexico" funded by the NOAA's Ocean Acidification/Integrated Ocean Observing System is in the news. 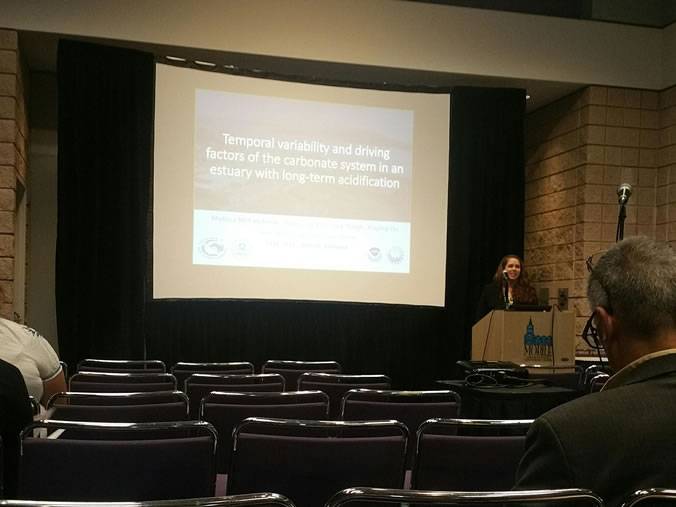 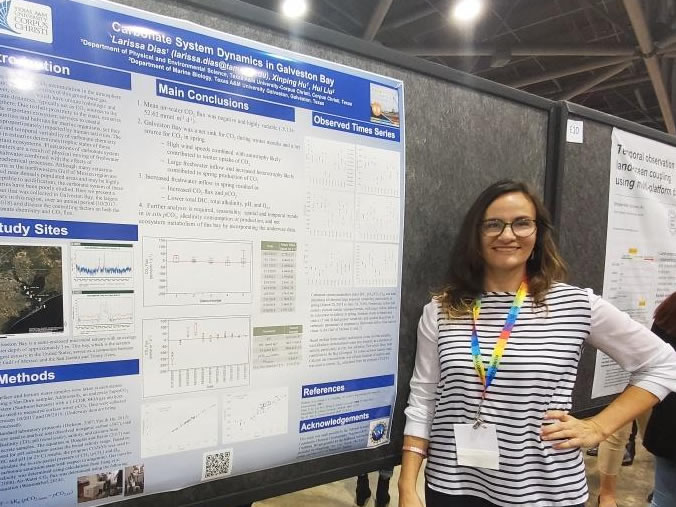 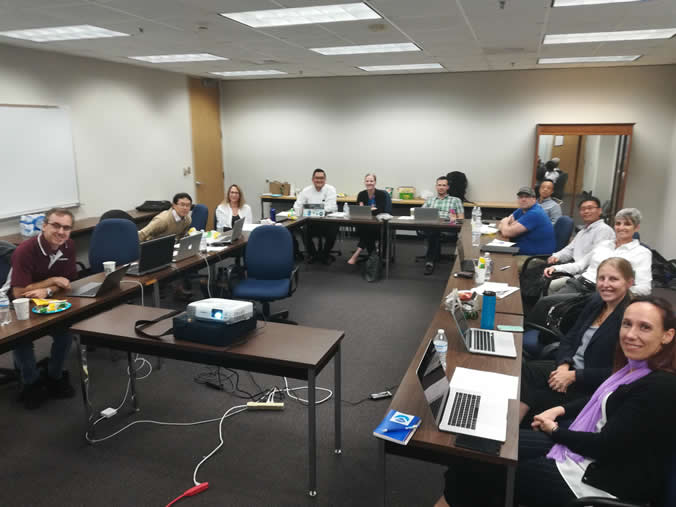 September 9, 2019: The Carbon Cycle Lab alumna Hongie, now a postdoc at the University of Delaware and Melissa, currently an intern at the Ocean Conservancy, met in Washginton DC. August 12, 2019: The Carbon Cycle Lab is funded by the NOAA's Ocean Acidification Program to conduct a study in the northwestern Gulf of Mexico. Our collaborators inlcude Dr. Leticia Barbero at the Atlantic Oceanographic and Meteorological Laboratory of NOAA, Drs. Steven DiMarco and Robert Hetland at Texas A&M Univeristy, Mr. Felimon Gayanilo at the Harte Research Institute for Gulf of Mexico Studies who is also affiliated with the Gulf of Mexico Coastal Ocean Observing System, and Dr. Lei Jin at Texas A&M University-Corpus Christi. 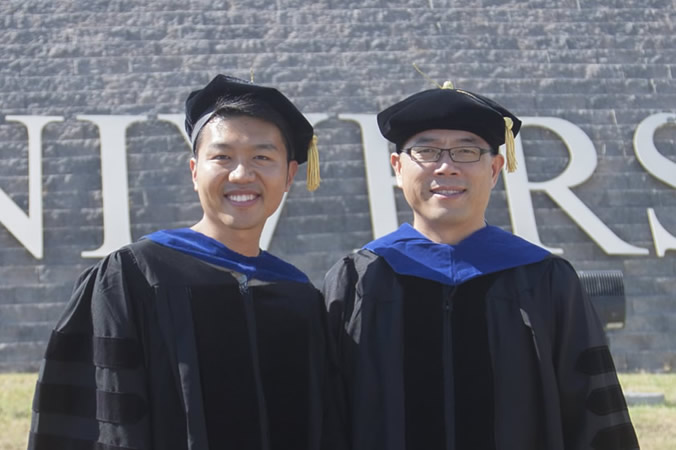 July 1, 2019: Melissa starts a half-year internship working on ocean acidification related issues at the Ocean Conservancy. Financial support to her intership is provided by the Chemical Oceanography Program of the National Science Foundation, as a supplemental funding to our ongoing project "CAREER: The Impact of Hydrologic State on CO2 Flux and Acidification in Subtropical Estuaries". 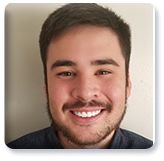 May 28, 2019: Melissa's manuscript entitled "Characteristics of the Carbonate System in a Semi-Arid Estuary that Experiences Summertime Hypoxia" is accepted for publication in the journal Estuaries and Coasts.

April 10, 2019: Corrie successfully defends her MS thesis entitled "Estuarine Air-Sea Gas Flux Kinetics, Corpus Christi Bay, Texas" and is getting ready to move to the University of Maine for a Ph.D.! 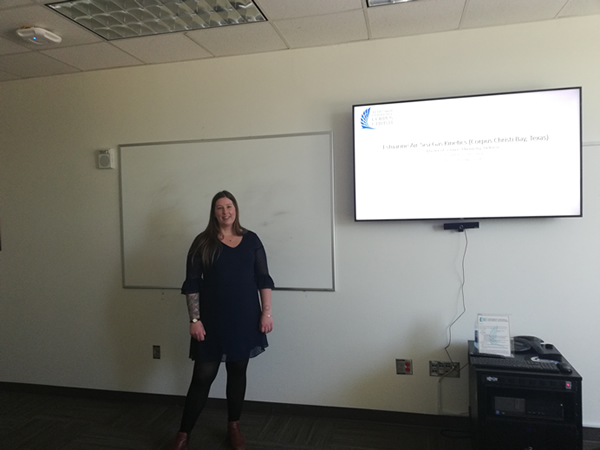 March 21, 2019: Xinping presents a talk "Decadal changes in the carbonate chemistry in northern Gulf of Mexico waters – Rising CO2, “leaked” nutrient and potential sea changes" (via WebEx) at the T.W. Bennett Symposium held in the University of Southern Mississippi.

February 25, 2019: Melissa presents a talk entitled "Temporal variability and driving factors of the carbonate system in the tidal inlet of a semiarid estuary" at the ASLO Aquatic Sciences Meeting in San Juan, Puerto Rico.

February 18, 2019: A paper entitled "Time of emergence of surface ocean carbon dioxide trends in the North American coastal margins in support of ocean acidification observing system design" with Hongjie and Xinping as coauthors was accepted for publication in the journal Frontiers in Marine Science. 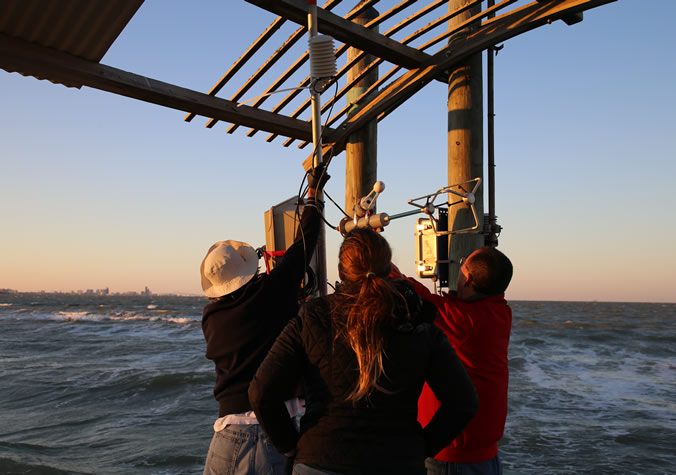 November 8, 2018: The CCL participates in the National STEM Day exhibition and presents the theme "ocean acidification" at the Texas State Aquarium. Thanks to Victor Delgado and Susan McGuire from Dr. Brandi Reese's lab for volunteering! 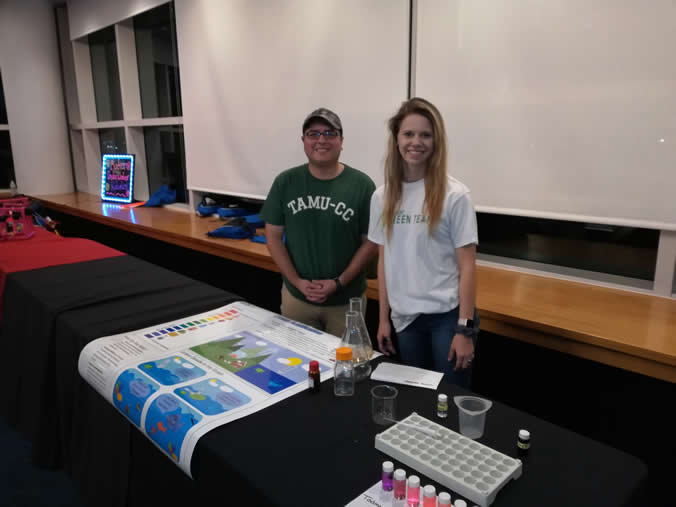 April 16, 2018: Xinping gvies a seminar "Estuarine Acidification - Through the Looking Glass" at the Department of Oceanography, Texas A&M University.

July 14, 2018: Xinping's manuscript entitled "Seasonal variability of carbonate chemistry and decadal changes in waters of a marine sanctuary in the Northwestern Gulf of Mexico" is accepted for publication in the journal Marine Chemistry. May 22, 2018: Xinping's coauthored paper "Effect of hydrological variability on the biogeochemistry of estuaries across a regional climatic gradient" is accepted by the journal - Limnology and Oceanography. This is a study funded by the NOAA’s National Center for Coastal Ocean Science. 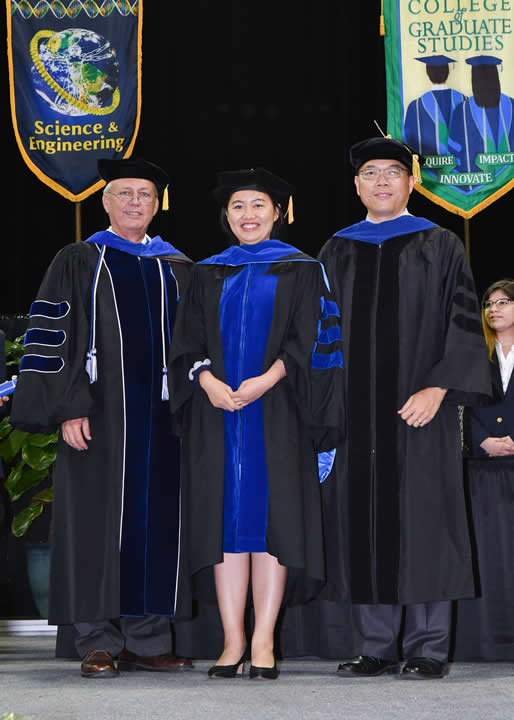 (From left, Dean Frank Pezold of the College of Science and Engineering, Hongjie Wang, and Xinping Hu)

April 18, 2018: The Carbon Cycle Lab receives Scientific Research Disaster Recovery Grant from the the National Academies of Sciences, Engineering, and Medicine Gulf Research Program. This fund will be used to replace lost equipment due to Hurricane Harvey and support us to continue examining carbonate chemistry in the Mission-Aransas Estuary.

April 16, 2018: Xinping gvies a seminar "Estuarine Acidification - Through the Looking Glass" at the Department of Oceanography, Texas A&M University.

February 27-28, 2018: Xinping attends the mini-symposium organized by the Flower Garden Banks National Marine Sanctuary on a localized coral reef mortality event back in 2016.

February 27, 2018: Xinping's coauthored paper entitled "Temporal and spatial fluctuations of groundwater-derived alkalinity fluxes to a semiarid coastal embayment" led by colleauge Dr. Dorina Murgulet is accepted for publication in the journal Science of the Total Environment.

February 11-17, 2018: The Carbon Cycle Lab is at the 2018 Ocean Sciences Meeting in Portland, OR. Five studies authored and coauthored by lab members are presented.

February 9, 2018: Cory and Hongming are at Galveston Bay surveying sea surface pCO2 on board the R/V Manta. 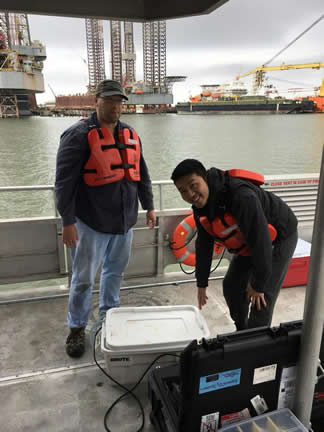 December 2, 2017: Hongjie wins the First Place on the poster "Modeling of Dissolved Oxygen and pH Dynamics in Baffin Bay" that she presents at the 7th Annual Research Forum hosted by the Marine Science Graduate Student Organization.

November 5-9, 2017: The Carbon Cycle Lab is at the Coastal and Estuarine Research Federation Biennial Meeting. 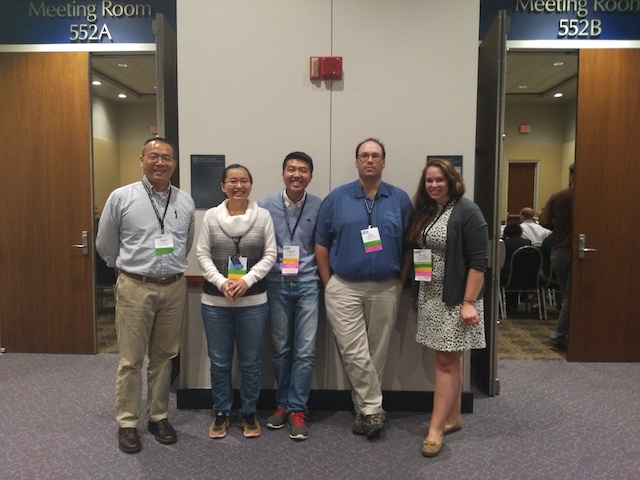 September 20, 2017: The Carbon Cycle Lab, as a part of a research team that has two other labs at TAMUCC, receives funding from the National Science Foundation to study the effect of Hurrican Harvey on Texas' coastal lagoons.

September 18, 2017: Melissa is elected as the Student Representative for the Gulf Estuary Research Society (GERS), a regional Affiliate Society of the Coastal and Estuarine Research Federation. She will serve the 2017-2019 term.

August 30, 2017: Hongjie and Melissa both receive travel award from CERF2017 to attend the meeting in Provindence, RI.

July 22-28, 2017: Melissa and Hongming attend the Gordon Research Seminar and Gordon Research Conference on Chemical Oceanography in New London, NH, and present two posters entilted "CO2 flux and long-term pCO2 trends of the estuaries of the Northwestern Gulf of Mexico" and "Hydrologic control on CO2333É444fluxes in subtropical estuaries", respectively.

July 10, 2017: Hongming's manuscript entitled "Responses of carbonate system and CO2 flux to extended drought and intense flooding in a semiarid subtropical estuary" is accepted for publication in the journal Limnology and Oceanography.

May 19, 2017: Hongjie and Melissa are both awarded grants from the Texas Sea Grant Grants-In-Aid Program for their dissertation research.

May 18, 2017: Xinping gives a webinar entitled "Estuarine Acidification, A Subtropical (Texas) Flavor” to the Gulf of Mexico Coastal Ocean Observing Network (G-CAN). The recorded webinar can be found here. 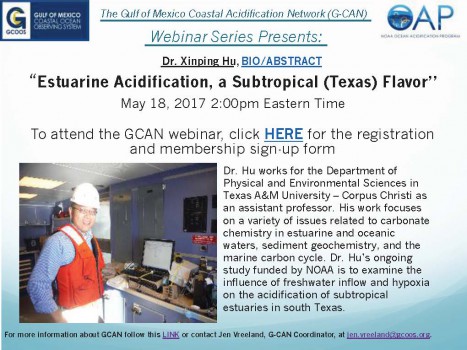 April 25, 2017: Xinping's manuscript "Effects of eutrophication and benthic respiration on water column carbonate chemistry in a traditional hypoxic zone in the Northern Gulf of Mexico" is accepted for publication in the journal Marine Chemistry. 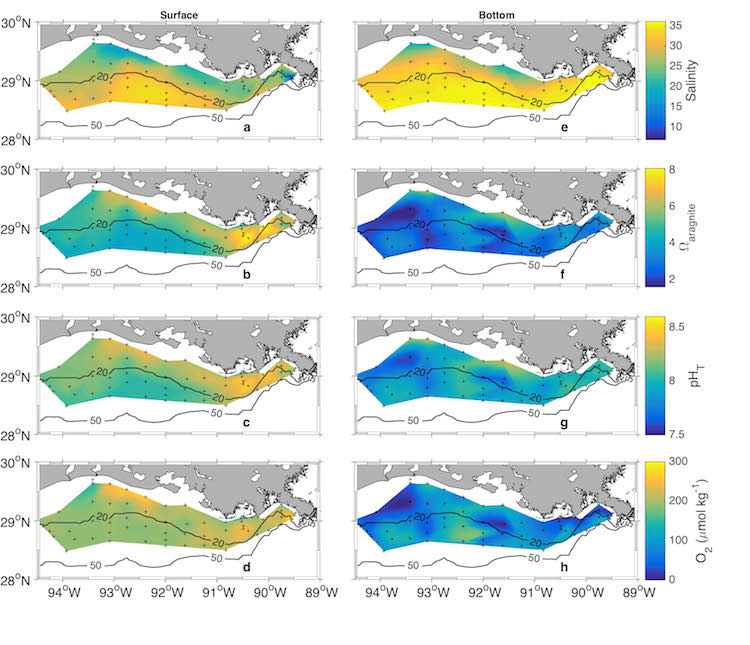 April 12-13, 2017: The Carbon Cycle Lab is at the 2017 Texas Bays and Estuaries Meeting. Two presentations are given by the lab members (Hongjie and Hongming) and Xinpign is also a coauthor on another presentation given by Dr. Wetz's lab. 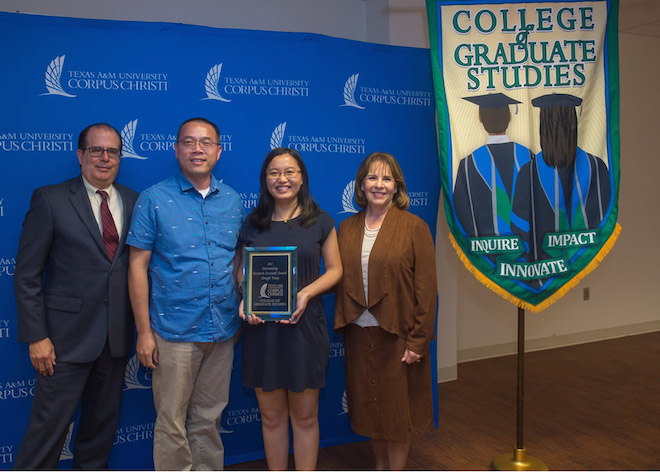 December 2, 2016: Melissa presented a talk entiled "Estimating air-sea CO2 flux and long-term pCO2 trends of the northwestern Gulf of Mexico estuaries" at the Third Graduate Research Symposium organized by the MSGSO and won the second prize!

November 29, 2016: Carbonate chemistry monitoring at the Aransas Ship Channel has been running for three weeks! Below is a glimpse of the raw data that we have collected (hover your mouse to enlarge the figure). 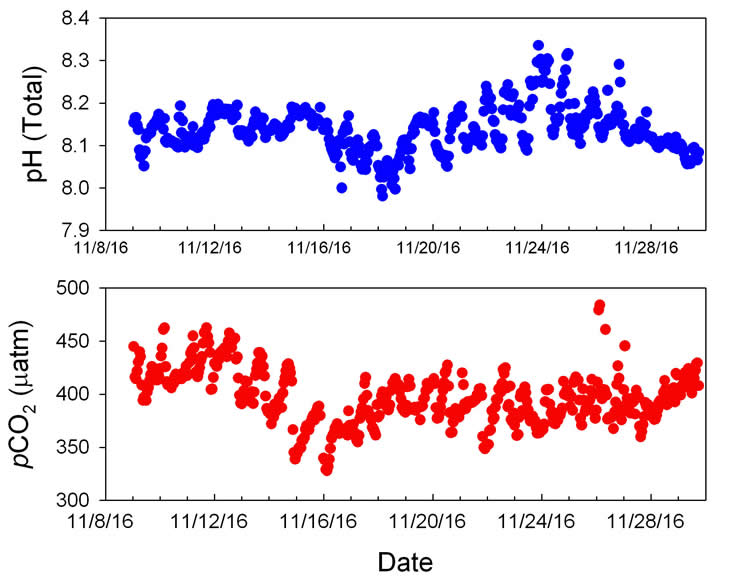 November 2-4, 2016: The Carbon Cycle Lab is at the Gulf Estuarine Research Society Fall Meeting. Three presentation are given by lab members.

September 19: Xinping co-authored paper "Coral calcification under environmental change: A direct comparison of the alkalinity anomaly and buoyant weight technique" is accepted for publication in the journal Coral Reefs..

May 23, 2016: Hongjie's paper "A new statistical approach for interpreting oceanic fCO2 record" was accepted for publication in the journal Marine Chemistry.

April 13-14, 2016: The Carbon Cycle Lab is at the 12th Texas Bays and Estuaries Meeting in Port Aransas, TX. Three presentations are given by the lab members and Xinpign is also a coauthor on two other presentations given by Drs. Murgulet's and Wetz's labs.

March 14, 2016: The Carbon Cycle Lab, among a total of five research groups at TAMUCC that received funding from the Texas General Land Office under the Coastal Management Program, will initiate a project to examine the role of groundwater discharge on alkalinity budget in the semiarid Copano Bay in south Texas.

Media coverage of these projects

February 21-26, 2016: The Carbon Cycle Lab is attending the 2016 Ocean Sciences Meeting @ New Orleans, LA. Four presentations are given by the lab members and Xinping also coauthors an additional three other presentations.

February 19, 2016: Xinping gave a talk entiled "Ocean Acidification - Myths, Facts, and a Case Study in a South Texas Estuary" at the Harte Institute for Gulf of Mexico Studies.

November 8-12, 2015: Xinping is at the 23rd Biennial Conference of the Coastal and Estuarine Research Federation. He presents a talk entitled "Acidification of a Shallow Subtropical Estuary - Reduced Freshwater Inflow, Hypoxia, and Ocean Acidification". Meanwhile, a poster presentation entitled "A Stable Isotope Study on Organic Matter Driving Oxygen Consumption in Two South Texas Estuaries" prepared by Hongjie is also given at this conference.

July 27-Aug 4, 2015: Xinping participates the Shelf Wide Cruise on board R/V Pelican in the Northern Gulf of Mexico. Below is a distribution of sea surface CO2 concentration (hover your mouse to enlarge the figure). 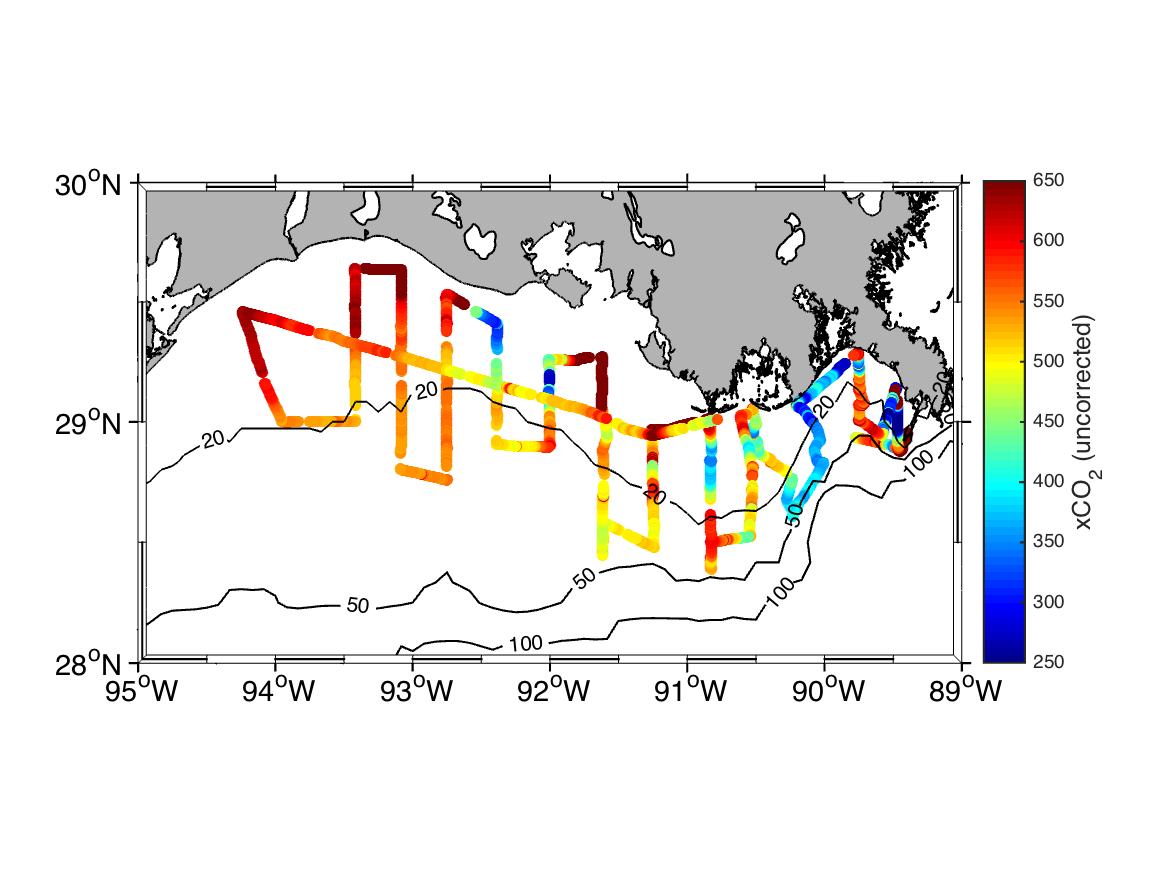 February 17, 2015: a new study led by Xinping entitled "Long-term alkalinity decrease and acidification of estuaries in Northwestern Gulf of Mexico" is accepted for publication in the journal Environmental Science and Technology.

Media coverage of this study:

Hongjie and Xinping are at the 2015 Oil Spill and Ecosystem Science Conference.

Hongjie's presentation is entilted "Evidence of Cross-shelf Inorganic Carbon Export in the Northern Gulf of Mexico".

Juy 26, 2014: Hongjie participates in the Shelf Wide Cruise on board R/V Pelican in the Northern Gulf of Mexico.

May 19, 2014: Melissa and Qiyuan participate in the Western Atlantic Climate Study 2014 cruise on board R/V Knorr in the North Atlantic Ocean. They will collect samples for characterizing seawater CO2 system and stable isotopes.

May 14-16, 2014: Hongjie participates in a field survey to the Flower Garden National Marine Sanctuary.